Basic How-To Q about exporting from TB to spreadsheet

I think what I’m about to ask is a known and straightforward procedure. But it’s not known (or recalled) by me at the moment. Thus this asking-in-public question.

Goal: I want to export selected fields from a TB file, to a spreadsheet-compatible file, to share it with some colleagues who usually work with spreadsheets.

Is there such a way? Could someone explain it? Thanks!

Thanks! Will put all these to use. Appreciate it.

CSV, or tab-delimited (same idea, different column value separator), is the way to do.

Now we have AppleScript/OSAscript support one could probably do something that outputs a formatted spreadsheet, but it’s likely more effort that the above (unless/until some script export writes such a script

Sort of like putting in a private walkway next to the municipal sidewalk “because I can”. LOL

Thanks for the mention of semi-colon delimiters, a variant I’d hitherto missed.

I’ve been using this little script for a while:

Copy-paste into Script Editor (in Applications > Utilities) or into your other script editor of choice.

In the first non-commented line just list the names of the attributes you want (between quotes as shown) in the order that you want them in the spreadsheet.

In the second non-commented line set the delimiter you want to try (tab or , or ; all tend work well with Numbers and Excel but you could use others as well).

Select the Tinderbox notes you want to export, and click ‘run’ in Script Editor.

The results will be placed on the system clipboard. You can then paste them into Numbers or Excel or wherever.

From start-to-finish (from copy-pasting the script and editing attribute names to pasting the data) the process takes about a minute or two.

Got the order wrong? Forgot something? Didn’t need something? The chosen delimiter didn’t quite do the job? Just edit either or both of the first two uncommented lines in the script and click again. This can’t do anything that traditional Tinderbox export can’t do but (for me) it is quicker to adjust.

I’ve found this useful for taking with me a rough approximation of the Attribute Browser on the iPad. Once the data is in Numbers I can easily group it by attribute value by using the Smart Categories feature. (Doesn’t group by individual members of sets, though).

For cases where the csv (character-separated value) approach gets choked by unpaired embedded " (straight quotes) or embedded tabs or whatever, it would not be hard (though the script would noticeably slower) to have the script generate a table in Numbers and set values in its cells rather than paste them in.

Thanks all for these incredibly useful answers.

One final (rudimentary) question. Suppose I have five attributes that I want to export, in a semicolon-delimited file. I understand the way to use ^value($Attribute1)^ to get those values, and the result is something like:

Here is my remaining question: How do I indicate (for the semicolon-delimited file) that we’ve reached the end of the series of attributes, and are starting with a new NoteName? Is there a different end-of-note delimiter that is needed, different from the semicolons that separate one attribute from another?

I’m pretty sure that a new line (i.e. a hard return) indicates a new row is needed in the spreadsheet.

Thanks! And, sorry to be dense, but I actually don’t see how to put that hard return in the export template. If I use any of the formulations below, they all render as literal characters in the exported text, as opposed to a hard line break:

Again I assume there is a simple answer, but it’s not one that is obvious to me right now. Thanks!

In the template itself, i.e. outside any ^export^ tags just use a normal line break (Return key). Within a string use \n (Unix style new line character), i.e. “Two\nlines”.

So let’s say you want to export two attributes with a line break between the two in the exported data, do like so:

Note the line break in the code between the two ^value()^ calls. This might give us exported text like

Ah, thanks! It’s so easy and obvious, once it’s pointed out!

Export is the best way because it’s most flexible.

Ahah! Have been using this program for a dozen years, and always new areas of surprise. Glad to know about this one.

always new areas of surprise. Glad to know about this one

For example, you and I first learned about the view-in-columns-then copy-paste approach in this thread:

Here’s something that should be the simplest possible thing to do (and I imagine is), but for which I’ve forgotten the simple steps. Let’s imagine I have a very simple Tinderbox file, in which notes have only a few attributes. For example, an address file, in which the attributes were: $Name, $StreetAddress, $City, $State, $Zip. Now suppose I wanted to export those values to a simple spreadsheet file. (Main reason: so I can consult them easily from my phone or iPad, since those don’t run T…

The view-in-columns-then copy-paste approach unfortunately does not bring over column headers. And in some cases where I have quotes in the Text of notes it produces scrambled output, whereas the script I posted above works well. Have you tried it?

For export to spreadsheets it matches the flexibility of templates with greater ease in choosing and reordering attributes, and changing the delimiter. Plus it’s reusable. You don’t need to set it up again for each Tinderbox document. Just list the attributes you want, pick a delimiter, select the notes, click , and paste.

Nice. If the task changed regularly, e.g. in terms of attributes needed, one could probably use a chooser dialog to the script (resists temptation to start tinkering…)

Does Excel immediately recognise (on paste) all of the default Tinderbox osascript output strings for particular types ?

I wonder if TBX Boolean, Date, (and list, set) etc strings might need a little additional post-processing for Excel ?

In the case of dates, for example, the default string passed to osascript has either

Similarly, I seem to have a recollection that, on paste, Excel parses the uppercase strings ‘TRUE’ and ‘FALSE’ as booleans, but interprets other variants as string literals.

That’s a good idea. That would be tinkering above the line.

The trick will be capturing a list of User Attributes in a document to help populate the chooser. It’s easy to grab the name of all attributes. But I haven’t figured out an easy way to grab just User Attributes.

Lists and sets are simply exported as ;-delimited strings that are placed in one spreadsheet column. Not as useful in that form in a spreadsheet as they are in Tinderbox, but one can do filtering and searches on them.

In my testing Tinderbox booleans exported via the script are interpreted as TRUE or FALSE in both Numbers and Excel. So that’s good.

Dates, on the other hand, come over as non date-time strings in both Numbers and Excel. So it appears that processing is needed both for passing dates to Tinderbox via script and for exporting them. Nice to know the name for the “ISO 8601” format. Good idea about testing for kind, then processing as needed within script.

Meanwhile, the script in its current humble form should help.

Good to hear that Booleans need no work.

then lower down, I think you should be able to write things like:

(Though on second thoughts, you will first need to screen out the “never” case)

Thanks @sumnerg and others in this tread. One more discovery: that we’d already had this copy/paste discovery, and not even two-and-a-half years ago! (I have spent the past week in every-day flight training, to get back into both legal and safety-related “currency” as a pilot after not flying a plane for two years. Reminder of related principle: until you have used a particular technique or procedure a number of times, it’s not really “yours” and you’ll have to re-learn it eventually. As in this case…)

Have not given the script a try, but will today. My discovery so far is that the cut-and-paste approach works superbly for “straightforward” attributes and values. It easily gets confused with long $Text entries that contain a lot of their own punctuation. Will try the various workarounds for that: Your script; trying to clean up the $Text fields before transfer; just using Export; pasting that one field manually into spreadsheet; etc. Experimentation is The Tinderbox Way.

And here is an update-update, from looking through the old thread. It’s full of gems, including this one from @galen, about a way to export Attribute Browser views:

I know this thread is old, but I just dealt with this today, and found a simpler method than the one that @mwra mentioned above. I’ll put it here for posterity. Rather than dealing with any kind of export code, you can just use the attribute browser. Search for the notes that you want with the query, and add the attributes you are interested in exporting as columns. For example here is the attribute browser with a list of expenses that I’ve been tracking, with the date, description, and amount …

Here is my Q: When I tried this just now, I ran into the following impediment – a grayed-out choice for Export as AB. 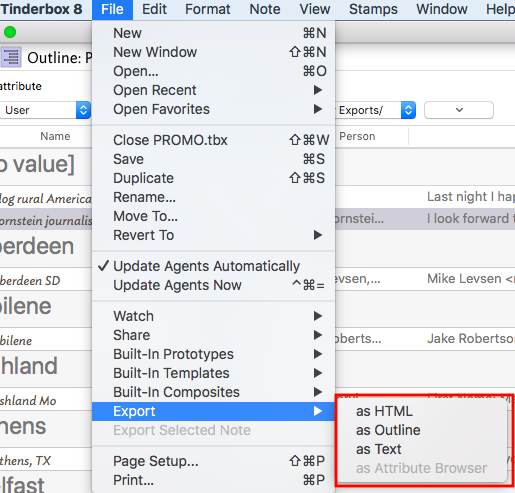 Any guesses on why that would be?

Still have the Script to try …