How can I close Displayed Attributes at once

The state of the diclosure triange is stored in system attribute $HideDisplayedAttributes and as described here.

There is also a shortcut to toggle visibility: [Cmd]+{shift]+[K] (see).

No, as all notes inherit $HideDisplayedAttributes. But as all notes can hold discrete values, just use whatever form of inheritance (prototypes, rules, etc.) to enforce the change of state as you choose. For instance, a rule (or a stamp) might set the $HideDisplayedAttributes value for all the children, or descendants, of the current note to the value set in the current note.

Dear Dr. Mark Anderson,
Thank you very much for your detailed explanation.
I will try to set the $HideDisplayedAttributes value for all the children.
Respectfully, WAKAMATSU

Dear Dr. Mark Anderson,
I try to set the $HideDisplayedAttributes value for all the children.
When I Apply to Test cell which you gave me as a zettelcode-demo-md1.tbx.
Test cell and ant notes are operated with this Stamp: 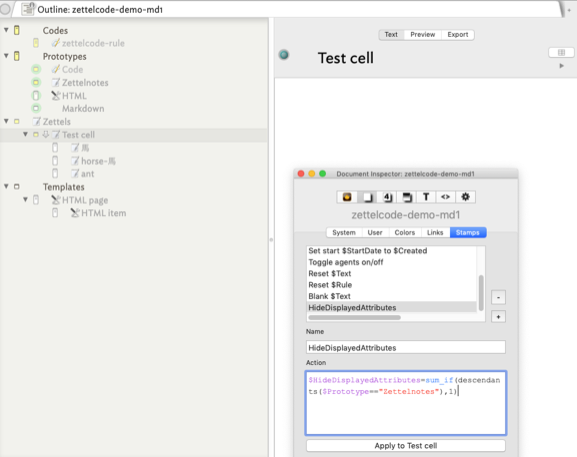 It is saddled with a mountain of problems.
How can I mark up those behaviour ?
I get the big things wrong.
Please give me a piece of advice.
Faithfully, WAKAMATSU

Rubbish in … rubbish out!

HideDisplayedAttributes is a boolean attribute, i.e. true or false.

sum_if() sums numbers - so not a boolean result. So your code means

In this case any number that is not zero will result in a true. So 0 gives false, 1 gives true, but -1 also gives true

Thus, if any (1 or more) descendants of the stamp’s note (here “Test Cell”) uses the “Zettelnotes”, the prototype, the HideDisplayedAttributes value for note “Zettelnotes” will be true, i.e. the Displayed Attributes table for that note will be hidden.

But alternatively, if no (zero) descendants of the stamp’s note (here “Test Cell”) uses the “Zettelnotes”, the prototype, the HideDisplayedAttributes value for note “Zettelnotes” will be false, i.e. the Displayed Attributes table for that note will be shown.

So, that is what is happening. What you haven’t explained is what you wanted to happen.

Also remember that attribute inheritance is not connected to the outline. A child does not inherit its parent’s attribute values (at least, without any code being written). Instead, it uses the document default, or the prototype’s value if there is a prototype and is has a custom value.

I try to set the $HideDisplayedAttributes value for all the children.

So, I read that as you wish to toggle (i.e. show or hide, via $HideDisplayedAttributes) the Displayed Attributes table of child (or all descendant?) notes. But, based on what criteria?

Also, if the prototype is setting the Displayed Attributes table content, you could use a rule like:

Using the above, if you hid the Displayed Attributes in the prototype, all notes using the prototype would do the same.

Another way to do the same without the rule is to make two new prototypes:

Now, in prototype “Zettelnotes” reset $DisplayedAttributes to the document default of “”, i.e. nothing.

To test the last idea above I suggest a new document (not a copy of an old one). Make sure no local values are set for $DisplayedAttributes or $HideDisplayedAttributes in any of the notes using the “Zettelnotes” prototype. Also make sure the prototype has no rule or edict code (at least not code that affects the Displayed Attributes table).

My use of prototype names like “Table-off” are only for illustration and they have now special meaning to Tinderbox; they are just the names of prototypes.

Dear Dr.Mark Anderson,
Thank you very much for your time and valuable advice.
I was not able to put in the right things that I should have.
I am learning a lot.
I will continue to chew on each of your points and go through trial and error.
Respectfully, WAKAMATSU

Dear Dr.Mark Anderson,
Thank you very much for your time and valuable advice.
I prepared a new note, learning what I have not mastered yet from the page you advised in the Tinderbox Forum, and tried to use that note to turn the Table on and off.
[[Tracking progress in summary tables]]
I was able to confirm the behavior of changing the Prototype specified in the note to “Table-on” and whether DisplayAttributes is hidden.
Summary DisplaysTest.tbx (96.1 KB)

I put HideDisplayAttributes in ZettelnotesPrototype itself and
function using check/uncheck to turn the whole thing off.
The work on each note is done using the shortcut I would like to use the shortcut “shift+cmd+K” to show/hide each note depending on the purpose at the time.
I am currently setting up a prototype of “Table-on” to see how it works.
Thank you very much for your detailed advice.
I think I have understood most of what you have taught me. I think I understand most of what you taught me. What do you think?
Respectfully, WAKAMATSU
P.S
I have not yet found a way to switch between prototypes using Stamp.
This is my future task.
P.P.S
A lot of ideas have been popping up since the advice from you the other day.
—”Instead of Table-on, there will be “Table-on1” and “Table-on2”,
each of which will have table items with different display attributes.— described,
if we apply this method I am thinking that this method can be used instead of
chapter and section in LaTeX Style??

I don’t really understand your ‘Summary DisplaysTest.tbx’. For instance:

The document is useful as a reference but, first could you clean out your experiments so what others see is just what you intend and not the remains of failed experiments? Having done that, what do you want us to try and do?

I can’t find this in your ‘Summary DisplaysTest.tbx’, so I am confused.

The work on each note is done using the shortcut I would like to use the shortcut “shift+cmd+K” to show/hide each note depending on the purpose at the time.

“shift+cmd+K” shows and hides the current note’s Displayed Attributes table display. BUT, if you do that you break the inheritance of $HideDisplayAttributes. Which do you want to do?

Dear Dr.Mark Anderson
I am sorry for any confusion this may cause you.
I wrote the wrong file name.
I should have written that I added it to HideDisplayAttributes in Sequential Notes.
As you have pointed out, I have been inconsistent in my policy.
I will report back after some more careful experimentation.
Respectfully, WAKAMATSU

No worries - and I’m aware of our lack of a same first language.

Next, select note ‘11’ and use ⌘+⇧+K or the disclosure triangle to show the Displayed Attributes table in that note. Now repeat the above noting that whichever the state inheriting from ‘Table-on’, the table in note ‘11’ always remains showing. Why? Because by setting it locally in note ‘11’ that breaks inheritance of $HideDisplayedAttributes from prototype ‘Table-on’ via prototype ‘red’.

I also fixed your $TableExpression for the ‘Sequential Notes’ container as all 4 columns were counting ‘red’ items as opposed to the colour at the top of the column. As all children use one of the 4 prototypes, the sum (by eye) of those 4 columns should equal their parent container’s $Child count. So, I’ve added a column for ‘n/a’ ('not applicable, i.e. no prototype) and one for the container’s $ChildCount. I’ve also added a child (with no prototype) to container ‘DD’. The result is here: 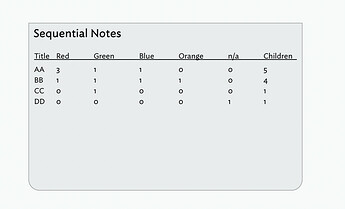 I’ve stored your original table expression and my new one in two code notes (using the ‘Code’ built-in prototype) to make the code easier to read.

Dr. Mark Anderson,
Thank you for your thoughtfulness.
I have been feeling a bit down because I do not have the ability to think in a straight line.
I am very grateful to have an English gentleman to guide me in the right direction.
I am very grateful for that.
The original meaning of the Japanese word “arigatou” is “rarely”.
The original meaning of the word “thank you” in Japanese is “it does not happen often”.
Therefore, the current usage of the word “thank you”.
This is the meaning of the word in use today.
My feelings are very similar to the origin of the word.
Your concern and guidance on this occasion reminded me of the following
In 1970, when I visited the Lloyds Bank in the city centre of London (as I recall) to exchange some money, the banker asked me a question to which I responded with a contraction like “I don’t know” and he kindly told me.
"Use proper English. From now on, you should use ‘I do not’.
I obeyed what he taught me and since then I do not use contractions in conversation or in listening.
It is not easy to learn the correct usage,
but many people have shown me the right way to go.
I would like to go back to the beginning and learn Tinderbox again.
I am going to read every detail carefully and try to learn the things you taught me.
Once again, I would like to thank you.
Respectfully, WAKAMATSU

The original meaning of the word “thank you” in Japanese is “it does not happen often”.

Unfortunately ‘thank you’ does not happen often enough in English as well.

I am sorry as English (or more precisely for me British English or ‘BrE’) is a languages where most of the ‘rules’ are exceptions to rules. The 1970s bank clerk probably meant well, but language habits drift over time. I think “don’t” and “do not” are equally used in both spoken and written English.

However, around Tinderbox 8 time, I removed all the contractions from aTbRef to try and make it more clearer in meaning for translation.

Meanwhile, I hope the examples in previous answers above help to to resolve your problem.