Hi!
I’ve found great Tinderbox template called “Outliner + Text Frame” created by Marcelo Mirage, but after exporting my notes the Text frame (right side in index.html file) in Safari shows blank space - only the left frame with outline works properly. No issues with other browsers like Brave or Firefox. Does somebody know how to fix this?
Thanks!

The key part to know is that the main page isn’t the Outliner container, but rather the note named Frameset which you’ll find immediately above it. After a full export, it appears in Safari like this: 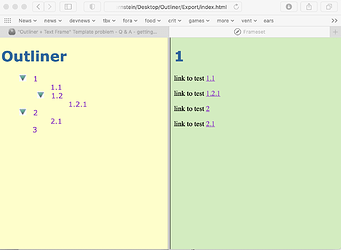 It works by building a set of two frames. The left frame is the contents of Outliner.html, and the right frame is set by the various links.

This will work. It’s probably not the way I’d do it now; frames are an antique facility, though iframe is still used for embedding stuff taken from other sites. But frames were a way of doing thinks we later learned to do with AJAX.

The best way to diagnose export problems is to look at the exported HTML. See what’s being exported, and compare that to the template, and to your expectations.

I tried it and it seems to work fine for me.

I’ve tried to do some exporting again and the template seems to work for notes included in original TBX file or for some new simple notes. It does not work for my copy-pasted notes that contain some pictures in $Text attribute.

The best way to diagnose export problems is to look at the exported HTML. See what’s being exported, and compare that to the template, and to your expectations.

That’s what I’m going to do now.