What’s the canonical way to clamp a numeric value to a particular min/max range? E.G., if I want to set Xpos programmatically but constrain it to be within [0,N] for some fixed N.

I see the min() and max() functions, and assume they are the tools to use. It appears they take a string rather than individual numeric arguments; that seems to introduce enough awkwardness to make me question if I’m on the right track, since if I read the docs correctly, they imply that I have to concatenate my numeric arts into a semicolon-delimited string. Is this correct?

You can pass numbers to min and max.

Are the restrictions the same for all notes or do different (individual?) notes have different limits?

Assuming for the moment we want to ‘clamp’ so notes must lie within +/- 5 map units on the X axis. Then the core of this is to check like so:

Of course if notes are moved by this rule they will shift. But $Xpos is the top left corner of the note. So if we want the note to always be fully in bounds, we need to allow for the width when at positive X.

Now, I’ve made an adornment (locked to the background) 20 map units wide. If I move my test note even slightly left of X=-10 units (left dashed line), it is moved back in: 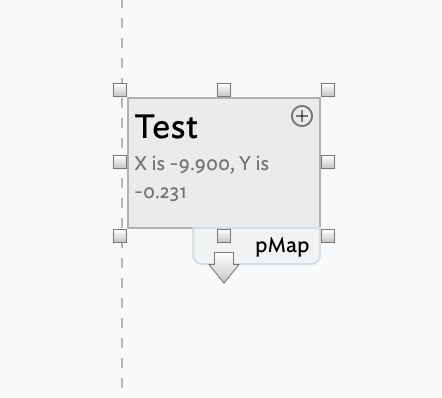 Same if I go the other way: 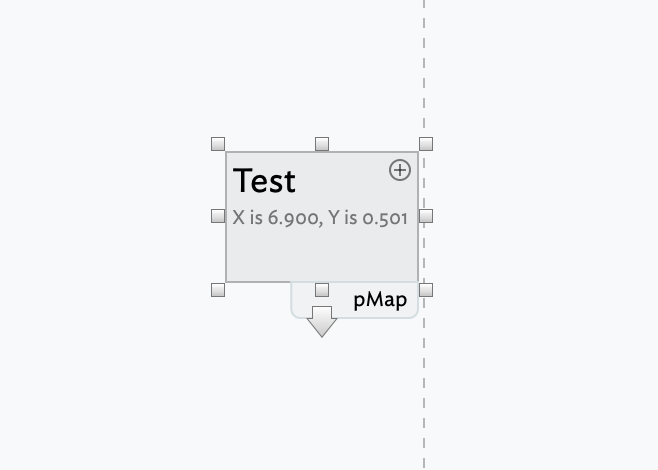 There is may be a slight delay before movement as the rule has to cycle and the map re-draw. Note: I very much doubt the map drawing routines were designed with this sort of trick in mind.

Note that is you want to ‘clamp’ on the Y axis, thre directions are flipped from normal cartesian settings. It won’t change the maths but it might surprise if unexpected. Here is my test document: clamp-test.tbx (83.6 KB)

In the test doc the rule is set in a prototype—see the outline tab, note ‘pNote’.

Hmm, it doesn’t work that way for me.

This sets $Xpos as I want:

This (which is what I take “pass numbers to max” to mean) sets $Xpos to zero:

Thanks for the reply, Mark. I understand the branching logic; I’m used to just writing the equivalent of

in whatever language I’m working in, so writing out if-blocks longhand would be a step backwards.

I appreciate the info about positioning, and the thorough example! Thanks!

That sounds like a good use case for the new ‘function’ feature: you should be able to write your own function clamp(…) so that you only have to write out the nested ifs once.

Sorry, I’m on the iPad so can’t test this at the moment….

That sounds like a good use case for the new ‘function’ feature: you should be able to write your own function clamp(…) so that you only have to write out the nested ifs once.

A relevant docs page for anyone stumbling across this later: Functions

Function? Sure. Aside: I’ll avoid the term ‘clamp’ in the function which has no meaning for Tinderbox users and would only confuse.

So here is a specimen function (for those not used to Discourse forum software, the forum default syntax colouring below is not marking Tinderbox syntax but gets close to it):

The function is invoked with an action like this:

We can also call the function via an agent. But, noting that $Xpos is an intrinsic attribute we must use $Xpos(original) otherwise we set the $Xpos of the alias in the agent and not the alias’ original note.

Both methods work. In my very small test doc, calling from a rule resulted in faster update than an agent. As both methods work, there is no ‘correct’ method of calling the function.

I did note in an earlier post that @jxxmxxj is actually using the map X-axis as a timeline, in which case do look at Tinderbox’s timeline view. It might help, though I’ve insufficient use case detail to be able to say. Also, if using the above ideas be aware date arithmetic in action code has some idiosyncrasies > Again, Tinderbox’s action code is not [your favourite formal code language], so expect syntax to differ from your assumed norms rather than that action code should be like some unknown (to Tinderbox) other system…

I’ve updated my earlier TBX to use 3 pairs of notes, each based on a discrete prototype. Two prototype’s use a rule to call the function, and one is worked via and agent. This is simply to chow both approaches could be used.

I’ve run out of time to read a read-me, but the test part is seen below, in the first (left-most) tab which uses map view. The doc is saved with this tab selected (you may need to scroll the map a bit to see what you want:

The second (right-most) tab is set to a root-level outline view giving access to everything: