The Obsidian team has already developed a powerful visualization add-on known as Canvas.

Cosma launch fails. Gatekeeper rejects it as a security risk. If a developer doesn’t bother to produce a signed release, I wouldn’t use it in today’s risky environment.

Obsidian’s new Canvas core plugin (still in limited preview release) is not a graph such as what Cosma’s appears to be from the images on its web page. Although Obsidian has always had a graph view, Canvases and graphs in that app are different things.

dear Paul,
thx for letting it us know; to my knowledge there is no export-to-html capabilities for graphs in Obsidian; that’s why I considered Cosma. any piece of advice?
best,
ph

Yes, in the first release there is no export feature for Obsidian Canvas. Early days – perhaps later they will add it.

I think you are talking about the graph in Obsidian.
The graph is simply a visual representation of the existing links. But, the Canvas is a different animal. You can add and edit notes; you can move around them like in any other mapping tool, including TB, I guess. Indeed, the new Canvas plugin can do what TB has struggled for ages to do: that is embedding notes with their titles in the map, and being able to directly edit the Title & body in place: You can also make the maps show just the important sections and subsections of your note–if you can want to create a flow without breaking down your notes.

It is actually incredible how they make this all possible in a very short period of development.

hem, sounds like to need a very large screen surface (and a very good reading capacity) because lots of text will be presented at a same time… but why not?
My own goal is rather to be able to export such graphs (nodes and their related notes) into HTML so that they can be readable in a website. Cosma does this but can be concerning in terms of security. Does anyone has an alternative app in mind?

the new Canvas plugin can do what TB has struggled for ages to do: that is embedding notes with their titles in the map, and being able to directly edit the Title & body in place:

I have not been tempted to use an expletive here in a very long time.

the new Canvas plugin can do what TB has struggled for ages to do: that is embedding notes with their titles in the map, and being able to directly edit the Title & body in place

I may be missing something, but this seems like one of the basic built-in TB abilities: “embedding notes with their titles in the map.” Eg here is a random screen shot from a working file I was using a while ago. The larger type is the title of each note. The smaller type is the text. (None of this is meant to be legible — just giving the look.)

Then the way I directly edit this, in map view, is to hit the Cmd-5 key which shows the edit screen for whatever note you have selected. You can directly edit title, text, etc in this window. 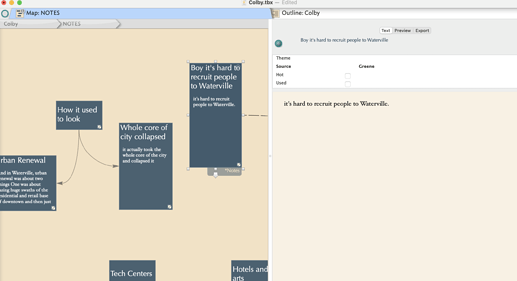 Then if you hit Cmd-6, that window disappears and you have a full-screen view of the map, with the note displaying all your edits.

Just saying that this particular feature is one I use all the time, and seems easy.

But I might have missed what you are looking for.

My Mac just happens to be in the repair shop so I can’t test. But the mere mention of the idea of an expletive here caught my attention. Is easy in-line editing of both title and text of a note in map view now a thing? Or is that done in the separate panel?

I don’t think there are any new features for that, just the standard cmd-shift-enter to edit the title in place and cmd-opt-x for a popup to edit the text and attributes, which have been there for generations (-ish).

I’m not totally convinced that editing the text in the map note itself adds much - it’s still only a shortcut away whichever method you use. Perhaps I’m missing something?

ASIUI, what is new is the ability to edit the text of multiple selected notes in the text side pane, when previously it was read only.

Good to see you! I think this is the core part of the earlier request:

edit the Title & body in place

Basically the request is to be able to edit title and text of a note directly in the view, regardless or whether there is a text view or such available.

At root here is the fact we all get set in our habits. I can see if the apps one is most used to only offer the above as an edit method it’s easy to assume that is the only/best way to do it.

Another non-commonality here is such editing also depends on the the nature of the notes and what they signify. If I’m just making a shopping list, the $Text will be short so edit in place is not—for the user—hard to do. A note with more $Text? No.

Looking at the movie above, Obsidian’s canvas, is very different to a ttbx map even if both use a limitless canvas/map/noting space.

I have not been tempted to use an expletive here in a very long time.

And I can see why. An issue here is the users PoV about hwo you generate and edit notes. To someone who conceptualises their note as a text box, Tinderbox is all wrong … and vice versa. In the same way, many get weirded out by the fact that the OPML outline messaging standard has no notion of note text! (what we might call the title as also the text. The OPML attribute for text was an ad hoc customisation invented by—IIRC—Omni Group for their OmniOutliner app and which me-too apps copied it both for compatibility and because their dev’s didn’t look the the OPML spec. But there’s no wrong here, in terms of PoV, but there is difference. Interestingly, OmniOutliner kludges the title/text issue. Both are column 1 of the note but where a delimitation is needed (e.g. export) the first paragraph os the title and all the rest is the text. Our personal norms != standards of behaviour or design (and to be clear I don’t think myself any different in this regard.)

I do see harms to Tinderbox though in bending itself to accommodate the PoV that a map object is a just text box. I certainly don’t want to live in that world, even if others do.

Another problem I see with wiki-concept-derived PKM apps is they (seem to†) ignore the notion of anchor text—IOW text that forms the local textual anchor of an outbound link. I think this may be, in part, to naïvete in simply recreating the Web in what is actually a hypertext app.

i’m not trying to diss anyone’s favourite PKM app. But assuming app X should work like app Y just because we are more familiar with Y (without understanding how/why Y works) leads to much of this "why doesn’t [app] have [feature] type of fruitless discussion.

†. Wasted an hour googling on link creation in Obsidian without finding any evidence‡ it could create a link based on anything but the target note name.

Even Wikipedia’s own MediaWiki fixes this obvious link creation error. Why? Try linking to a note with a ] in the note name. I do wish people took time to understand that Web/wiki==a limited sub-set of hypertext and to try to understand the latter.

‡. Happy to be wrong on this, but even so it reflects poorly on that app community’s failure to document the app properly. On that aspect of documentation, I do feel I have the real world experience and expertise to be entitled to comment.

Sorry, it was just random banter.
You are absolutely right it is mostly personal habit. I also agree with the other users that adding a direct editing on the map might not add much to Tinderbox given the editor window is just a click away. I am sorry for bringing it back.

No worries. Actually it is useful occasional reminder for us all that the right/obvious way to do things is very contextual and subject to change. If nothing else it makes me revisit my assumptions.