I’ve searched, but haven’t found this being requested previously (or that it is possible in the current version…).

Request: It would be useful to be able to name each window in a TBX file so that they can be identified easily (both in the Window menus, and for programmatic selection – either in TBX or via third party tools such as Keyboard Maestro).

Failing that, please could each window beyond the first created be prefixed with a number so that shortcuts can be allocated to them and/or they can be easily distinguished in the Window menu?

Rationale: I use separate windows quite a lot, because I often want to see various views on the same data at the same time. Even on a smaller screen I find it more convenient to cmd-backtick through windows then trying to navigate between tabs.

There are two downsides to this approach:

For example, the TBX file I have open now has five windows:

The text windows get a name, which is good, but they are transient, while the three main windows (which are always open) all have the same name:

If I could name the windows (‘Data’, ‘Admin’, ‘Dashboard’) – or even if they were named 1:Journal 2022, 2:Journal etc – which would be reflected in the Windows menu, then I could use a Keyboard Maestro palette to select each window simply, rather than cycling through all five. Or I could just use the mouse (shudder) and select it from the Window menu…

Obviously, this is not a major problem – and I’ve probably spent too much time describing it – but I would find it a helpful addition. I have no idea how much development it would take, which of course is a very important consideration, but as an optional feature, I don’t think it would disadvantage users who don’t have the same workflow.

I use separate windows quite a lot, because I often want to see various views on the same data at the same time.

How? I ask as whilst different tabs within a window can have different (note) focus, the front/current tab of discrete windows (of the same document) must use the same focus. IOW, set a different focus in Window A, then Window B shows the same note selected, even if that note is not in scope of B’s current tab’s view.

The name in the caption bar of a single document window is the source TBX document’s filename (including the file extension). Thus, this is a window in document ‘test.tbx’:

The default name for tabs is in the form ‘[view type]:[document name minus extension]’: Thus:

Notice that there is another tab of the same name. If I select that:

… we see it has a different scope. The view’s root container’s path is shown in the breadcrumb bar.

But buy using saved tabs, it is possible to use a custom title in a tab. Thus:

[edit: corrected incorrect information]
To use customised tab labels and (descriptions) you must save the Tab in the document’s tab Gallery. If editing unsaved tags (i.e. in the current doc but not in the saved tabs list) you must click the Done button to save the edits (note: this closes the dialog!)
Here is this doc’s Gallery:

Note: you can’t edit and save the title and/or description of an unsaved tab (or not as at v9.1.0).

The suggestions all make sense. I suspect the omission of such in the current app reflects the fact that long-term users are used to opening tabs/windows as needed rather than having them all open. Indeed, the recent Gallery feature (above) goes some way toward this. But, there is a configuration disparity in what data is saved for a tab. Newer views like Attribute Browser and Hyperbolic view store configuration in a tab. Old views like Map store configurations view in attribute values of the parent container.

I’ll address the wider point in a separate post.

The info in my last is relevant but doesn’t fully address the issue. I too am frequently baffled by the Window menu’s window list. I can’t turn v5 any more but ISTR it was a bit more informative.

To be clear, I’m not against the idea of naming windows (case having been made by OP). Whether the current Gallery could accommodate window and tab functionality or two differing dialogs are needed is a consideration.

Meanwhile, in the Window menu’s listing, I’d like it that the window items:

Hi Mark, thanks for the detailed reply. A couple of comments…

“… I often want to see various views on the same data at the same type.”

By data I mean ‘my information’ in the loosest sense… So, when I’m developing this file, it’s useful to see

It doesn’t have to be a map, of course: it’s useful to have the same note in two outline windows, one with the ‘Text Pane’ selected, with the other set to ‘Preview’, while a third text window has the template to change the export. (Normally this would be spread across two monitors, but I’m on the laptop…) 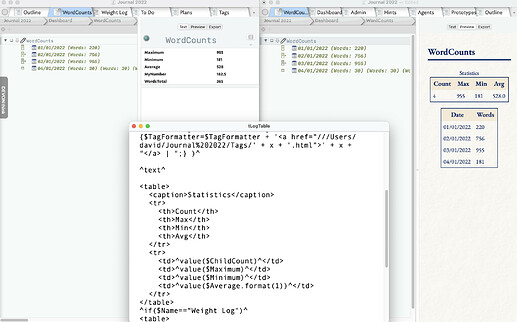 I’ve not really explored the gallery, so thanks for the reminder to do that!

I don’t really have any ‘default tab names’, because I tend to open new tabs by right clicking on a container in the outline and ‘open in new tab’, which replaces the file name with the container name (as you can see in the screenshot). I leave the first tab as the full outline for navigation, so the filename is fine.

So tab names aren’t as much as a problem: it’s the window names which are confusing.

Thanks again for your comments!

Note: I’ve corrected a slight miss-statement about the ability to edit the name/description of tabs as yet unsaved to the gallery.

Thanks for the feedback. If one window has a front tab that is a root-scope (i.e. whole doc) outline that a changed selection won’t result in an out of scope not. Meanwhile, if the other window is a 100% width map, there is no text selection visible. This is likely why you’ve not seen the issue described. conversely as 100% view width uses don’t crop up that often† I overlooked that as a factor.

†. …and there’s nothing wrong with that at all, lest it appear otherwise. It’s just less mentioned here in the forums!

Thanks for the feedback. If one window has a front tab that is a root-scope (i.e. whole doc) outline that a changed selection won’t result in an out of scope not. Meanwhile, if the other window is a 100% width map, there is no text selection visible. This is likely why you’ve not seen the issue described.

Sorry, Mark, I’m not sure I follow – which issue haven’t I seen?

Do you mean that the shared focus means that the selection from the first window sometimes isn’t visible in the second window map/outline, even though the text pane (hidden or otherwise) persists? Yes, I’ve noticed that (it’s part of what I referred to in the original post). As I said, it’s the biggest thing I miss from the bad old days of V5…

Or am I missing something again?

No that’s it. You can’t have two windows that have different text pane content. Not everyone’s problem, but frustrating for some.