Organizing essay with Map vs Outline

I will try to paste in an Outline I am using to organize my thoughts. It works just fine for that. When I switch to map view, it seems like every line in the Outline ends up as a separate little element in the map. That does not help me think spatially in map view. Is this just an inherent characteristic of TBx? Is there something I am missing about how to go between Map view and Outline view that would be helpful? Thanks very much, David
Is there some other way for me to attach a view of the Outline? When I paste it in here you cannot see the indents.

proofreading
p3, line 2: CALTCHA
200.3.1. misspelling of fair
200.6.5. county
206.1.4. home
209.3. foundationSSS
700.1. remove comma between “toxic” and “pollution”
values and policy intent–preamble
not reasonable to state/imagine/demand that all social ills are or can be corrected by the health care system
obligations after education
perhaps more than a single year per year of funding.
out-of-state and out-of-country will be more complicated
other countries and plans do not do this
providers
licensed?
are we paying for alternative providers without any oversight??
Title I: eligibility, etc
Title 2-finances and budgeting
why should the university budgets come from this fund
Sales tax is regressive.
301.4. School health teams
500.2. private professional schools
501.8. admission priority for bilingual
502.1. debt forgiveness
503.2
Section 701
funding of malpractice should be changed
What is this intended to be?
is it an alternative to AB1400?
has fatal flaws

We have the video recordings from Meetups, but how about the chat logs?
Meetup 18SEPT21 Lesson 1: Blogging [Basic] with Tinderbox - Setting the foundation
eastgate (eastgate) September 17, 2021, 8:11pm #2

Let’s see where we can go! I took your list above, pasted into a Tinderbox note, and exploded it. Here’s the resulting map after Cleanup ▸ To Grid. 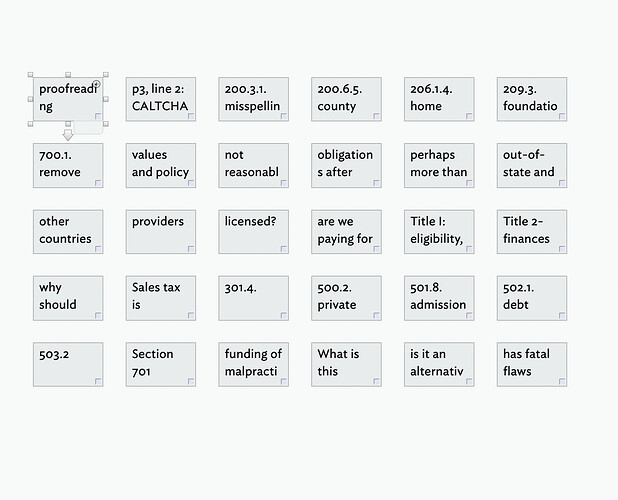 That’s not very informative! Now, I’m not sure I know anything about what you’re exploring, but I’m going to make some guesses and try to arrange the map into what strike me as some sensible clusters. For starters, it looks like we’ve got some notes that concern typos: that’s a cluster. I also removed the note “proofreading” and added an adornment with the same name.

Now, I’ll do the same thing with the preamble, but I’ll also change the color of the notes because we’re talking substance rather than proofreading. 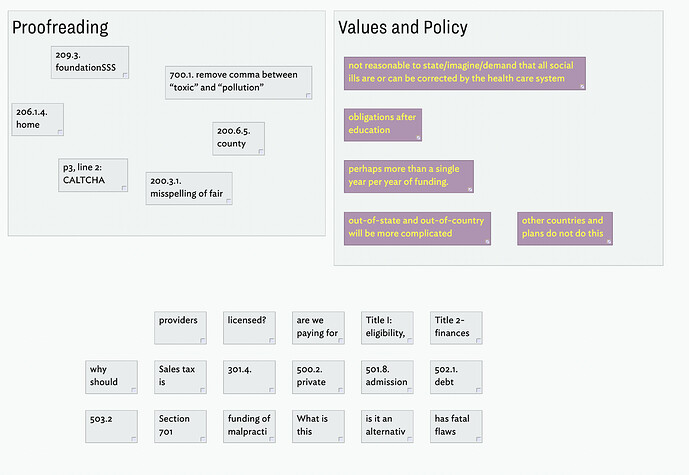 After a bit, we’re here:

Now, this seems pretty straightforward. But, suppose your Congressperson told you, “I’d like you to send this to my tax staffer, but organized around tax policy first, leaving the general policy questions to the conclusion. And highlight stuff about our state, OK? You might need to reach into something like "School health teams” for the new introduction. That’s the sort of structural editing where map view can shine.

As another example of organizing in map, here’s a corner of my rough notes on the intellectual history of hypertext. A lot of these concern the background of map view and related visualizations! 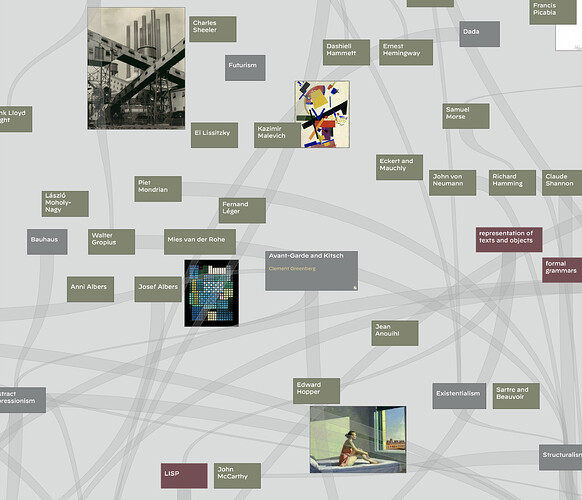 Where do we get the idea for this sort of visualization? One source is the 20th-Century concern with underlying structures of knowledge — Levi-Strauss and Structuralism, of course, but also historical theories like Toynbee and Spengler, and the great surge of interest between the wars in formal and synthetic language. That work is now the foundation of computer science.

Visually, everyone see Mondrian and lots of people see Albers and the read of the Bauhaus gang. But there’s also a ton of anticipation of things like map view in Futurismo and Russian Constructivism. And there’s Leger, and Sheeler: I really want to get those diagonals! This ties into a revolution in writing, and a separate revolt in art criticism — Clement Greenberg’s “Avant-Garde and Kitsch,” for example, which is also in dialogue with Sartre and Beauvoir, and later with Levi-Strauss. Which is where we came in!

Again, I’m never sure where things want to fit. What do we do with Frank Lloyd Wright? (Always a headache!) Is it right to separate John McCarthy (lower left) from Richard Hamming (mid-right)? I like the pairing of Anouihl and Hopper, but is it reasonable? Does it get us anywhere? Perhaps Hopper belongs with Hemingway?

Thank you very much. You understood what I was looking for, as they say: “spot on!” Hope to see you in the next meetup!!
David