Is there a way to control the vertical position of notes on the timeline.

I have three notes, lets say 1960, 1970 and 1980 are the start dates for each.
On the timeline display I want them to go down the page as the date gets more recent. Hence 1980 would be the lowest item in the timeline.

At the moment Tinderbox seems to be deciding where to put these items, so that for instance 1970 is higher on the page than 1960.

How do I control this position.

If there is an order, I’d expect it be outline order. I tried your described scenario, using 3 sibling notes: 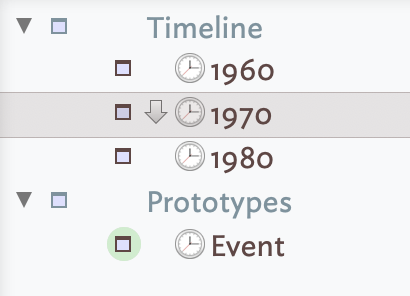 Each note has a $StartDate os 1 January of the note’s named year. The timeline looks like this:

If I now move ‘1970’ ahead of ‘1960’, I see the following which suggests OutlineOrder is used to decide vertical order:

The apparent placing of ‘1980’ is efficient use of space common to any timeline plotting I’ve seen. If I extend the duration of ‘1960’ to 20 years, we see outline order still being used to order the plot.

How do I control this position.

You don’t. You have to work with the limitations above. Be aware a timeline view is not like a map: you can’t manually force the drawing locations. Depending on the degree to which entries ‘physically’ overlap on the timeline—or don’t, the normal horizontal event packing efficiencies may start a new ‘column’ of enticed such that, as above ‘1980’ may sit above ‘1970’. I’ve used a variety of Timeline tools and they all have this same limitation/efficiency (depending which way you see it) to the layout of the timeline.

Thanks for looking at this and providing the explanation.

In this case my expectation was set by the application “Aeon Timeline”. Aeon has a “switch” that allows control of the display to optimize for space or allow the events to cascade vertically.

Understood. Aeon Timeline is a great app and about the only specialist Timeline app I know. That extra sitch help point up the fact that such fine control isn’'t the norm. But for a specialist timeline app such extra features make sense.

I can attest Tinderbox → Aeon Timeline export/import works pretty something. As one who’s been an Aeon Timeline beta tester, it’s the main thing I check. I’ve been to busy recently to dive into the Aeon Timeline v3 file format. Aeon Timeline v2 was XML (like Tinderbox) so even if you couldn’t ‘just’ use default import to bring in all data, it was pretty easy to edit the XML to add the extra data.

Sadly v3 (out any day now) is dropping the really sweet HTML timeline export offered by Aeon Timeline v2. So, I probably won’t upgrade as the HTML export is more useful than new features I won’s use. But for those who are doing (creative) writing with a strong temporal arc, Aeon Timeline continues to improve. Another small indie software that needs user support. Happy to recommend it to others.