I was messing around in Aeon Timeline today and produced this PDF: https://www.acrobatfaq.com/tbdemos/TB-versions.pdf

The PDF lists every public release since Tinderbox (called ‘Ceres’ during early builds) launched on 19 Feb 2002, as Mac users were beginning to move from OS System 9 to the shiny new ‘OS X’. The current v9.2.0 is the 152nd public release of Tinderbox. v6 marked the big app code re-write accompanying the move to Xcode and building off current Apple frameworks.

In the PDF, app icons shows where new icon artwork arrived. The first change was in v4.1.0 (to accommodate bigger icons in the newer OS - see here). Since then there have been new icons for v6, v6, v8 and v9.

Red dots indicate a new baseline for a TbRef, a baseline indicating where I have started a new TBX and removed all previous per-release annotation in notes. Without doing so, many notes would be near unreadable due to the number of per-edition annotation. v6’s baseline was delayed as there was lots of settling down of new features after the codebase re-write.

The PDF shows the problem common to any timeline display - how deal to run before starting drawing back at the top.In Aeon Timeline v3, it is clearly a case that drawing new item only starts if the start date of a new item isn’t overlapped but the label of the preceding item. Laying out timelines is less simple than it might appear.

Aside: sadly, in going from Aeon Timeline v2 to v3 they dropped the rather good HTML5-based web export of the timeline (a feature i used the most).

Original data from a Tinderbox file and then exported to Aeon Timeline? Or data kept in Aeon?

The data is exported from aTbRef (the un-HTML-exported children of this page). In fact I copied the noted into a new TBX file:

From which I exported a CSV which I then imported into Aeon Timeline v3. I made a few further changes (e.g. the node colours) before exporting the timeline from Aeon Timeline to PDF. Inside Aeon Timeline v3, the data look likes this: 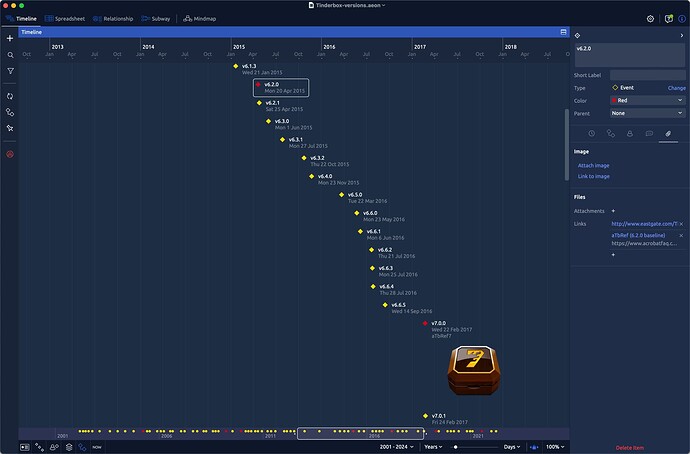 As noted sadly Aeon decided to remove the rather good HTML5 web timeline export they had in v2. So now PDF is the best fall-back, but a poor substitute IMO. For all Aeon Timeline v3 added it lost the one feature I used the most!

Thanks for the example file, Mark! I will save it for my own attempts at making that conversion.

This is exactly why I like saving this sort of extra metadata about the app as it’s a great source of real-world data which makes for a better test of timelines.