I’m relatively new to Tinderbox, and have mostly worked in its Outline view. But I was hoping to try it out for a projects that I’d like to structure in the Maps view.

Basically, I’m trying to put together a project that shows how a certain set of people belong to different groups, organizations, and businesses – but with different job tiles for each of these different entities. I’d also like to share this with colleagues, so this should be exportable in a format that they can see and use.

At first, I tried to set this up in Outline view by creating containers and populating them with notes, e.g., notes representing individuals under the People container. The text within the notes contains some basic background info, and I’ve included URLs for the notes, too. I also started to create note-aliases for the people who belong to the different organizations, and was hoping to create links between them in the map view.

But I’ve quickly discovered several challenges that indicate that setting this up might be tougher task than I first expected, so I’m wondering if Tinderbox might not be the right app for this – or if I’m just overlooking some basic steps to to better structure this.

Some basic observations of challenges, and questions about how to resolve them:

I’m open to any suggested approaches, and would even consider doing this in another app if Tinderbox seems ill-suited for this kind of project. Thank you very much.

Hi there, this is actually quite from an analytics perspective, but I’m curious ultimately what you want your output to look like. So many questions in terms of the types of items and attributes you’re looking to associate and what you’re long-term goal is.

The basic building blocks of what you’ll need are:

Again, it is all immediately doable and from a QDA perspective, Tinderbox is very much an ideal tool for this type of discovery. We just may need to approach the desired outcome in a less direct way. 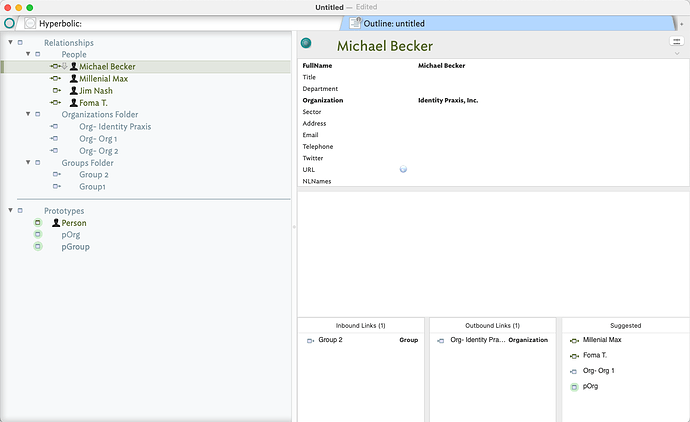 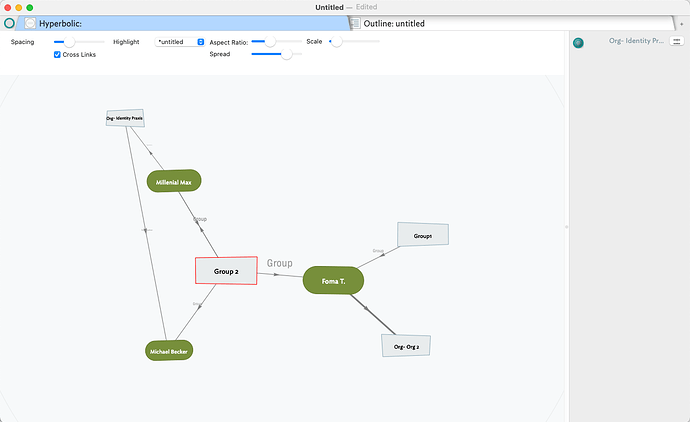 If you can provide a bit more detail, perhaps we can gin up a demo for you. Perhaps draw it out on a piece of paper and share the picture.

Wonderful. I’m thrilled to hear this.

I’m happy to do the work setting up the prototypes. I feel comfortable with them, but don’t know my way around the links as much so I hope you’ll forgive me if I need to ask basic set up questions about them.

I put together a very rough sketch of what I had in mind, but I’m told that I cannot send embedded media at this time, probably because I just signed up to the forum.

It doesn’t look like I can upload my drawing. Broadly speaking, I’d say that I’m trying to show a group and then the individuals withing them – both self-contained – such as a group titled “Actors” and then individual notes or containers of some sort containing the individuals.

hmm…put your drawing in a png format, that might help. Also, as for learning links, check out my training videos here: Mastering Tinderbox: Training Videos (Complete List). I have a number of them on links.

Thank you. I tried putting it in a PNG format but it still won’t upload.

Any file with an extension of .png, .jpg or .jpeg should be fine.

I tried again. Still no luck.

Here’s a screenshot of one way I might approach this in map view. 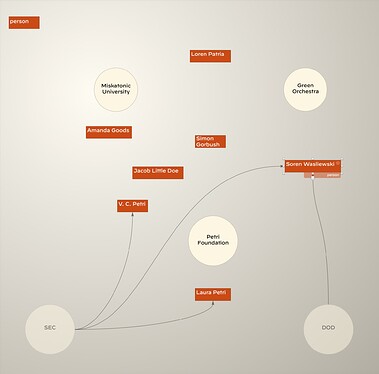 This is just one way to do this, suitable for a modest number of organizations and individuals. If you have hundreds, this might not scale; if you have thousands, you’d want a different approach.

Note that a Tinderbox document can have dozens of maps like this, each in its own container. Containers have an infinite plane; this is good in many ways, but of course from outside you can only see part of a container’s map.

I see the problem: you’re a brand-new user, and the system is causing trouble. I’ve fixed that! 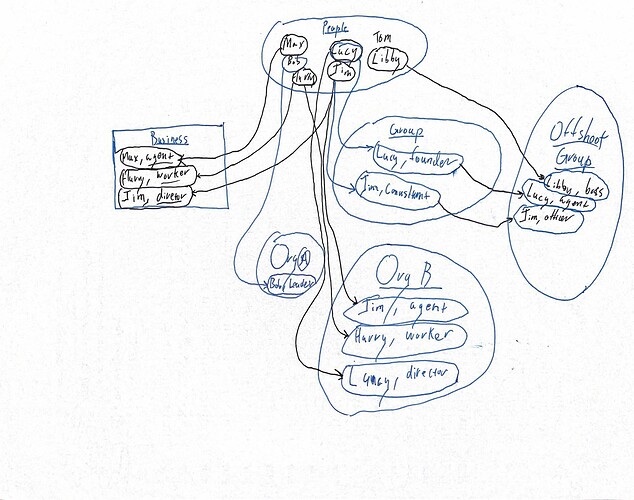 That worked! Thank you.

Thank you, @satikusala & @eastgate for your helpful feedback.

I have been looking at the links video tutorial incrementally, and am trying to imagine how the links might work for this project, including link action code, which seems fairly complex.

Regarding prototypes, I thought about including many of the same attributes, but I’ve stumped by trying to figure out how to solve the issue of changing Tile and URL values for the same note-alias. As you can see from my sketch, the titles for the same people changes depending on which organization, business or group they belong to, and the URL value might also change since it connects to links that are particular to those entities. But I can drop those attributes and values if those things are too technically complex to set up.

In any case, I’m wondering how you’d suggest I proceed now that you’ve seen my drawing and have a better sense of what I’m trying to accomplish. I’m happy to push ahead with setting up the basic structure that @satikusala put together in the Outline view, and would love to get a bit more guidance on the set up for the prototypes, which attributes to include, and how to apply them.

Thank you again for all of your help.

Alternatively, perhaps the $Name of the note is the job title, and the note links to the Person.

Thank you for those suggestions. I might elect to drop the job description attribute because it might just take too much extra time to set it up, and I’m worried that organizing the notes and links will be quite a lot of work.

But just to clarify my conundrum, I was seeking a way to have note-aliases for individuals – so most of the values would be static – but the values for $Subtitle or $Caption would change depending on where the individual note-aliases are in groups, businesses and organizations. I admit that this seems hard to resolve, and that’s why I originally though of creating nested containers that would first refer to a group, then job titles, and then the individual note-aliases.

Moving on, I’m going to start putting together a TBX file based on the organizational structure that @satikusala produced in his outline view, and continue to advance my understanding of how links works.

My questions at this stage:

Thank you again for your assistance.

This is an interesting problem from a visualization standpoin(at least to me) t. Will there be many people in the group and will the structure change continuously. What value do graphical links have?

Would a table provide a better representation of the data (guess it depends on how many people there are, if the data becomes too cluttered and how fluid the data is).Do the links of any added information ?

I do not have enough technical/programming skills to understand how to guide TB where I need to go(more practice). If tabular representation would work, could the attribute browser be used with this problem ?

Mostly as an exercise for my own curiosity, I have show the data as a table. 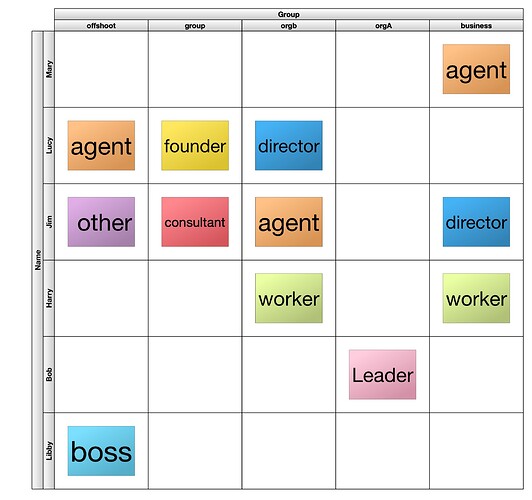 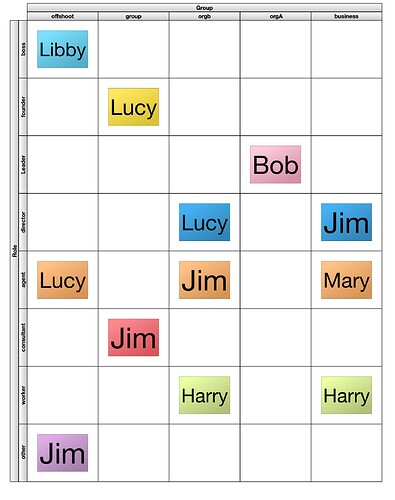 Thank you very much for this. It’s a compelling format, and I really appreciate how you put it together on my behalf. But it won’t work for my purposes.

More than anything else, I need to show the relationship between a certain set of people belong to different groups, organizations, and businesses – to show how these people are recurring those groups. The titles are notable, but not as important as show those relationship with groups, aliases, and links showing the connections between them.

But I thank you very much again for all of you.

the titles for the same people changes depending on which organization, business or group they belong to, and the URL value might also change since it connects to links that are particular to those entities.

I have an idea for this, but I’d like to talk it through with you first. Would you be open to a zoom call? DM me and I’ll send you a link.

The key is to remember you can have nearly an infinite number of attributes, e.g. many URLs, Title, and dictionaries associated with people (I can explain when we talk). I’m excited about this, as answering a question may address a lingering challenge I’ve had (not with Tinderbox, perse, with but information architecture).

It is my experience, that it is not an action code that is complex, rather it is the information architecture that is complex. That is to say, you need to think about your data and where you want it to start, flow, and end up. Once you’ve figured this out, the action code is easy, it becomes self-evident.

I would really like to understand what you mean by note-aliases. In Tinderbox a note is not the same thing as an alias, and visa versa, so this hyphenated connection is confusing me.

I can have multiple individual note-aliases located in different containers

Could you provide suggestions for attributes for the pOrg and pGroup prototypes?

I can. Let’s do this when we talk.

I don’t have a strong grasp of hover expressions,

These can or can not be useful depending on what it is you want to convey. Let’s discuss.